The Dutch have traditionally had the reputation as being cooperative rather than competitive. Late 2020 two of our members announced they will increasingly cooperate in the coming years.

These companies, Portside together with Greenshields & Partners, plan on working together with the mission of expanding their business to the whole of Africa. In 2017, the companies met during an NABC-organized trade mission to the Africallia trade fair in Burkina Faso. In the years that followed, they spoke at length and decided to come up with a strategy that will enable them do more businesses together. With this initiative, Greenshields & Partners have joined Portside’s offices in the Netherlands. The two companies are about to set up a strategic development plan for the logistics business which is focused on West-Africa.

Portside was founded 10 years ago by Mr. Bas de Vaal. ‘It started with a suitcase but now it has expanded,’ Mr. de Vaal said. The company operates operations in Ghana, West-Africa. Portside is short for Port Marine and MTG (Multipurpose Terminal Ghana). The MTG is a depot for containers and tanks, which also has a warehouse. The company currently has a staff of 50 and owns 7 trucks. Portside has a ship agency unit which handles a lot of shipping for Dutch companies and some other small shipping lines. It mainly focuses on trucking, customs clearing and basic logistics within Ghana and transit to Burkina Faso as well as other countries within West Africa. They have also expanded to Togo since September this year, whereby they do transits from Togo to Burkina Faso and Niger. In Togo a process of setting up a depot and warehouse is ongoing.

Mr. Addie Bom started working for Greenshields and Partners in 2009. He previously lived in Guinea Bissau for 15 years and during that period, he had his own logistics company. He chose Guinea Bissau not only because it was adventurous, but also because of strategic interests:  the country had major logistical issues to tackle. Greenshields & Partners were awarded a big contract in 2013, regarding the transportation and local delivery of 380 containers with mosquito nets in Burkina Faso, where an office was established. Business picked up from there. In 2017, a second office was set up in Sierra Leone.

Benefits of joining hands
Both companies share a similar view and for this reason, they decided to increase cooperation. ‘Greenshields and Partners is specialized in the forwarding business, while Portside is into logistics. Although Portside are more related to port agencies and local intersection in ports in West-Africa, both  feel there is room to cooperate. We are both fishing in the same water but we are not catching the same fish. Together, we will have more fish,’ said Mr. Bom.

‘Doing business in Africa often comes down to having good relationships with people and business partners,’ Mr. De Vaal added. ‘I have always enjoyed working together with Addie. We share a passion for trucks. I believe that customers will choose people that own their equipment and not just a desk and a computer. I think Greenshields & Partners has the same vision,’ Mr. De Vaal concluded.

Positive about Africa’s economic recovery
With the success that both companies have achieved, it is their vision to expand to other countries for more operations as they plan to look for a good solution to connect different countries and ports with each other. Eventually, they aim to have all the areas in West-Africa covered so that they can do all kinds of movement from any port to another country.

Portside will continue expanding, according to owner Bas de Vaal: ‘I think we will have a few trucks running up and down from Lomé to both Burkina Faso and Niger.’ Mr. Bom of Greenshields & Partners also stresses the importance of growth, as long as it does not go too fast: ‘It is important not to have too many expectations. We must be focused on slow growth and be smart. ‘Since we are relatively small companies, we can decide on a quick way to do it so that is our advantage.’ 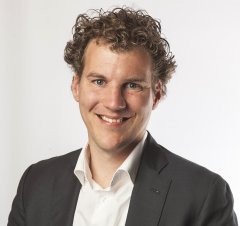 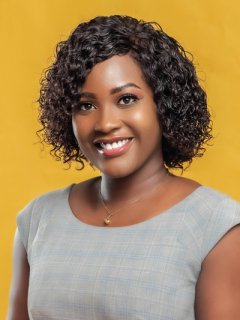 Betina Gbadago brings female power to the port of Lomé. She took up a job as Managing Director of Portside Togo. She's looking forward to serving you from Lomé.